There is currently a war going on in Ukraine. Many people die every day.
The stance of amateur radio is that it is apolitical. However actions by the Russian Federation and their military have crossed a line and I cannot in this instance remain neutral. I never thought that such human-hating ideology could grow in Russia that led to a war to destroy a neighboring state. This ideology is real Russian fascism. 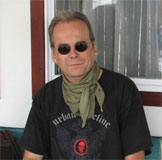 My name is Oleg Vashchenko, and I live in Kiev City, Ukraine. I am 61 years old. I have two sons and a daughter. I have been living in Ukraine most of my life, grew up and lived in Krasnodar City, Russia.

My interest in radio started way back in the 1970’s when I was a boy and I always wanted to be an Amateur Radio Operator, I finally obtained my first licence in 1986 with the call ut5uii. Now my callsign is ut2uf.

I operate mainly between 6 and 80 Mtrs on HF, typically cw. I usually chase DX and also I like ragchewing.