In days of old, when ops were bold,
And sideband not invented,
Words were passed by pounding brass,
And all were quite contented. 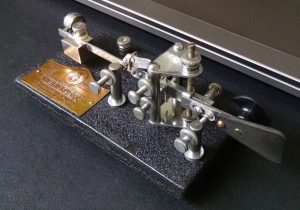 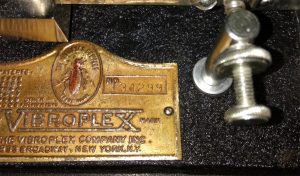 Vibroplex is the brand of side-to-side mechanical, semi-automatic Morse key (known as a BUG) first manufactured and sold in 1905 by the Vibroplex Company, after its invention and patent by Horace Greeley Martin of New York City in 1904.

1. When was your Vibroplex made? You can see this in John’s table.

Until recently, the Vibroplex Co. put serial numbers on almost all of its keys, except a few early production runs. However, records of production dates and serial numbers were lost, discarded, or destroyed. There was no way to match a key’s serial number to a date until 1996, when John Elwood, WW7P, published a list of serial number ranges and corresponding production dates. Starting in 1990, John compiled his list from a survey of more than 3000 Vibroplexes, their serial numbers, and the date they were purchased, if known.
Owners should apply some common sense to the information in John’s document. As John says, much of the serial number/date table was generated by interpolation. I believe the dates are accurate to within a year or so. For few years after WW1, Vibroplex advertised the number they had sold, so the dates are very accurate. John has added commas to the serial numbers to make the table easier to read. Vibroplex did not use commas inside serial numbers.
When the Vibroplex Co. changed hands and was moved to Portland, ME in 1979, the serial number sequence was restarted and became fairly erratic. The company again changed hands (new owner Felton “Mitch” Mitchell, W4OA) and was moved to Mobile, AL in 1995. At that point the serial number sequence was restarted at 100,000. If your Vibroplex has a Portland, ME nameplate, John’s table will help you find when it was made, but John’s table doesn’t include information for Alabama bugs. Amateur radio operator Scott E. Robbins, also known by the call sign W4PA, became the 8th owner of the Vibroplex Company on December 21, 2009. At present time the company is located in Knoxville, Tennessee.

Many thanks to John for a truly amazing effort!

Based on materials The Vibroplex Collector’s Page with additions.

2.4. High quality replacement parts for Straight CW Keys, Semi-automatic CW Keys and Paddles
Unfortunately this business is closing and it is sad.